I know, I owe you guys the conclusion of Lost and Found, It’s more or less ready, but I wanted to share something that happened to me this morning. It seems that every time I need a break from the stuckness of life, I get it in the form of an unexpected interaction with a stranger.

The Institute of Electrical and Electronics Engineers (IEEE) is a professional organization with the mission of fostering innovation in the field for the betterment of humanity. I joined for the cool t-shirt.

It’s a Mount Rushmore of our greatest mathematicians, engineers, scientists and inventors from the field of electrical engineering. If you’re not a US person and don’t get the Mount Rushmore reference, it’s a massive rock carving of four of our most historic US presidents. If you’re from the US, Mount Rushmore is still that.

This is a photo of my t-shirt I wore today. We’re sort of analyzing it in this post. 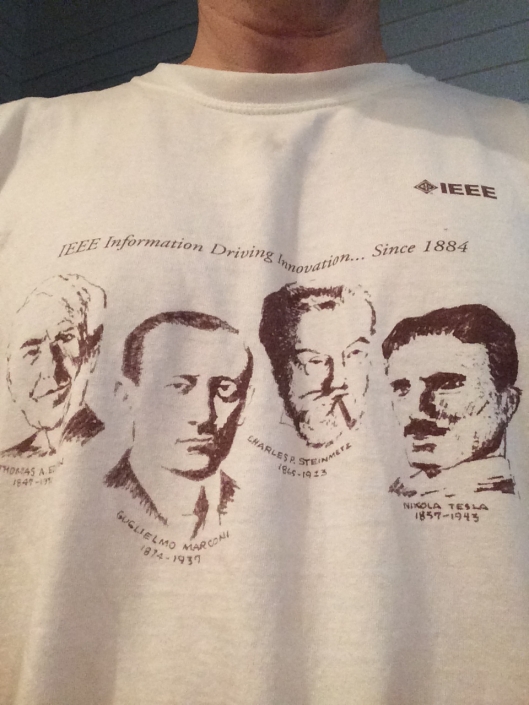 You’ll probably know a few of the names on the shirt, like Thomas Alva Edison on your left. When I was a kid, I wanted to change my name to Alva. Thomas was too common and Edison was taken. My parents said no and that was that. I wasn’t a very persistent child.

Edison was my childhood hero. This was before I knew of his ruthless business side, when he’d rather electrocute an elephant (and other animals) in public with over 6,000 volts of Alternating Current (AC) to prove how dangerous AC was, compared to his perfectly safe Direct Current (DC) design. Of course, Edison’s design could have allowed the animals to live, if had not chosen to kill them to prove a point.

I know that will make some of you hate Edison, and I get that. Part of me hates him, or maybe all of me hates that part of him. Regardless, if you wish to read about my life-changing experience at witnessing Edison’s bite marks in the corner of his workbench, check out one of my earliest and (to me) one of my most inspirational Mapping the Edge posts, What I learned from Edison’s bite marks.

Whatever you think of Edison, my childhood experience at his lab in Florida permanently changed me for the better, as an engineer and an artist. We need to understand that the world of the late 1800s and early 1900s was different from today. Back then, animals were considered inferior creatures. Being their human caretakers meant that we had the right to feed or to pet or to abuse or kill them as we saw fit. That’s what caretakers do, right?

Also, many humans were brutally tortured and mistreated back then, unlike in our enlightened millennium, when all of us are equally respected, simply because we occupy the same breathing space on planet earth. In our modern days, nobody is considered a monster. We accept, support, and celebrate the intrinsic worth of all people, even those who believe and live and view things and vote differently than we do, right? I digress. The t-shirt…

On the far right of my t-shirt image, you’ll find the mysterious Nikola Tesla. Most of you know the name, if only from the cool books, television shows and movies about his life and works. I consider Tesla to be one-third Albert Einstein, two-fifths Franz Kafka, and the rest one of Kafka’s characters (probably mostly that metamorphosis dude who woke up as a bug). Tesla patented many inventions, including some that have reportedly remained sealed from the general public to this day.

When you only sleep a few hours a night – sometimes not at all – you tend to be an overachiever. Kafka not only invented things in his mind, but he actually mind-built and mind-tested his inventions to perfection, before anything was ever built. He didn’t waste time prototyping. Once he had mentally tested a device, and refined it until the thing functioned perfectly in his head, only then did he build it. When he did, it was the complete final product, ready to go. Tesla was cool as heck, and I say that without mentioning his Death Ray.

You may also know the name, Marconi (if not the face). What you may not know is that Marconi’s first name was Guglielmo. I bet it would take you at least several guesses to come up with that. In fact, it’s a worthwhile exercise. Go ahead and try to guess Marconi’s first name. I’ll wait. Don’t read the part about it being Guglielmo until you do.

Done? I told you it would take a few guesses. Sorry, I got off track again. My t-shirt. Marconi invented the transatlantic wireless broadcast we call the radio. He saved many a sailor’s life during long ocean crossings. Today, his invention mostly entertains them. According to the Starship song, We Built This City, Marconi plays the mamba, which I believe is a deadly African snake. This is in stark contrast to Marconi playing the mambo, which is a deadly Latin dance.

The remaining face on my t-shirt (the third from the left) is the face of the great Orson Welles.

No, it’s not Burl Ives. Stop it. It’s the face of Charles Steinmetz.

No really, it’s the face of Charles Steinmetz. Trust me. Steinmetz never got the recognition of the others on my chest. Still, his mathematical mind and engineering background allowed others to make major advancements in electromagnetics and efficient designs of AC electric motors.

This concept wasn’t enough for him. In an era when everything electrical had to have a solid physical connection or it simply wouldn’t work, Steinmetz introduced the concept of wireless power transmission. Think of that. Not only did this require no electrical connections, but no wires were needed at all. The signal was carried by the air itself. This was not exactly a death ray, but it has a certain level of coolness, if you’re into cell phones, tablets and wireless internet and such.

Anyway, back to the reason I started writing: my cool Mount Rushmore of IEEE t-shirt. I had it on when I picked up a prescription this morning at a local pharmacy. I’d never seen the young girl behind the counter before. She gave me the pills, asked for my date of birth, confirmed it, took my payment and gave change.

I said thanks and started to put away my wallet, then this happened: She mentioned something about a coil.

“What?” I looked up at her for the first time. I noticed that she had a shiny silver nose piercing that resembled a small dog bone. You’d think my mind would drift to Fred and Barney of the Flintstones, but I heard distant internal echoes of, “Meet George Jetson… His daughter Judy… Jane his wife…”. I wouldn’t know why until later.

Behind her left ear and down the back of her neck was the tattoo of a spider web. The spider, if it existed, was nestled somewhere well beneath her clothes. That’s where spiders usually hide, tattooed or not. In this way, it was realistic.

“The Tesla Coil,” she repeated.”He invented it, right?”

“What,” I asked again. No doubt, I stunned her with my acerbic retort.

She pointed to my chest and to the face of the guy who was part Einstein and part Kafka and part a Kafka character. She nodded toward the face. “Him. Tesla. He invented the Tesla Coil right?”

I looked down, pinched Tesla’s mustache, let him go with a snap, and smiled. “Yes, he did.”

“I think the Tesla Coil is, like, the coolest invention ever,” she said, “like coolest of all time.”

She looked at my chest as if she had just spotted her favorite rock star in person for the first time. My smiled grew wider. “Yes it is. It absolutely is. I love the Tesla Coil. You know why it doesn’t kill you, don’t you?”

“High voltage, but low current,” I finished. “I’m an electrical engineer with two degrees in it, and I know it’s the low current that -”

“Well, yes,” I agreed. “The Death Ray sort of kills you, by definition. It’s a directed beam transmitter”

“Cool.” She giggled and snorted over the bone in her nose. The spider web flinched, like they tend to do on warm, breezy mornings. I wondered if there was time for a quick story before I left. A glance over both shoulders showed me that there were only five people in line behind me to get their medications. Only one or two seemed in urgent need of it, so I figured I had time for that quick story.

“Sometimes, when I was alone in the lab, I’d power up our small version (school budgets being what they are) of the Tesla Coil, and —”

“Yes you are right!”

She and I laughed out loud, louder than we should have at 9 am in a pharmacy with people in need of medication, and who would have it by now if I’d just leave.

I took the small crinkly white bag and headed out. “Thanks again. Nice to meet you.” I was half way down the aisle when I heard the girl with the dog bone nose piercing and spider beneath her shirt yell toward me.

I looked back to see her waving. I waved back and pushed against the door handle. The front door opened to expose bright morning sun, as if I’d been in the lab all day. I spun around and waited for the door to almost close. Just before it did, I screamed to her, “It’s alive! It’s alive!” I gestured like only mad scientists do.

I imagined hearing laughter from the pharmacy counter, instead of a slamming door. I wish that girl could know that on me drive home, I laughed a mad scientist laugh in her honor. I’d like to think that she found no interest in the t-shirts of the other customers for the remainder of the day, but that would be selfish wish.

Maybe a better hope for the dog-boned, spider-webbed girl would be that she dedicate her life to Tesla Coils and Death Rays. May she spend her life either making monsters, or making the things that kill them, or better yet, may she do both. May you make all of the monstrous art your soul can stand, and may you spend your life saving the village. We need both, I think.

We’ve soaked our torches in flammable flaming liquid and we’re ready to head out, only we’re not quite sure which one is the real monster. We may not know the monster’s true identity until we’ve burned down everything that it’s not. But I digress again. My t-shirt is in the washer and I had a good day in it.

Now, if I only knew which shirt to put on next, and where to go once I do, and what to say. Maybe I’ll go to the grocery store. We could use some fresh bread. The two sad remaining slices show signs of mold on the crust. As nasty as that is, it’s also sort of beautiful. It’s alive. I think I’ll put it back in the bread box for another day or two before I trash it. Then I’ll kill it.

Now to publish the conclusion of Lost and Found…

1 thought on “Mount Rushmore of IEEE”