My absence from Mapping the Edge this week is a result of stubbornness.

Dad’s house burned overnight Friday, November 6-7. Initial indications are that it’s a total loss, but I’m too stubborn to agree. Yes, the house is mostly gone, but it’s not a total loss. He lived there alone. Well, not alone. He had Pete.

Almost everything, as in, almost every thing, is gone or damaged, but Dad got out, thanks to the stubbornness of Pete the dog. Pete whined and aggravated Dad, and ignored repeated commands to hush and to lay down, and to accept Dad’s promises to play with him in the morning. Finally, Dad gave in to Pete’s constant whines.

Dad got up to see black smoke filling the house, and Pete eagerly urging him to leave the house. He said he tried to call 911, but accidentally knocked the phone into the trash. He couldn’t see to fish it out, so he grabbed two coats hanging by the door and got out with his dog. They are both alive and safe. Like I said, it wasn’t a total loss.

Dad waved to passing cars to call 911, but nobody stopped. I guess it’s not wise to pull over in front of a burning house and a frantic stranger waving for help. I get that, I guess. Dad dragged a chair off the porch and pushed it down the walk to his detached car port. From there, he watched the fire, and the fire fighters arrive from three companies. They did everything they could to save the home.

He was not done waving. Like a stubborn old man, he waved to try to get the attention of the fire fighters. He said they came in through the upstairs roof and walls searching for him, room-to-room, as only stubborn rescuers do. That’s how they save lives when the occupants don’t have a Pete, or when they’ve breathed too much smoke to respond, or when the fire starts where they are instead of just far enough away to allow time to escape, and an unblocked path.

The only other upstairs exit was through a metal back door, which is now deformed and melted in half. The decking immediately outside the upstairs door is a hole twenty feet above concrete and blocks. Plus, the smoke would have been much worse upstairs.

So, Dad and Pete exited out the front door, and he watched his place burn, not a home he had bought, but an estimated 3,000-square-foot home that he stubbornly built with his own hands. From nothing. What hasn’t burned to the point of disappearance has suffered water or smoke damage, as if things can suffer.

I lost was a collection of wet plate collodion originals I had made with my own hands. Glass and metal doesn’t compete with persistent, stubborn fire and heat. I told one of the insurance representatives that I had stored them upstairs (the upstairs that no longer exists) for safe keeping. “My experience,” he said, “is that there is no such thing as a safe place to keep things.”

Some thank-yous: To a God Who protects, and Who has a way of sometimes reminding us that stuff lost is never total loss; to the neighbor or neighbors who called 911, to everyone involved in fighting the fire, and to those who conducted a room-to-room search for him; to family and friends who helped and offered help and a place to stay, and continue to do so, in the stubborn way that only true family and friends can.

And thanks to a dog who refused to leave his master, either too in love or too stubbornly loyal to just save his canine self. Dad said Pete kept going back into the burning house as companies from three towns fought the fire. I was raised as a dog person. Only a dog would try to guard and protect and help as walls, insulation, and light fixtures fell down around him, just in case there was someone else still inside.

In summary, Dad lost everything, but only in a way. I didn’t, the family didn’t, and Pete didn’t. We only lost things, which, is a loss that should never be called total. By the way, today is my birthday. I guess that means that I’m too stubborn to celebrate without filling you in first. 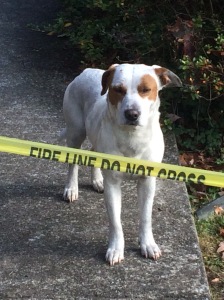 2 thoughts on “No Safe Place”