“Sure. We can clean it up, remove the yellowing, digitally repair the damaged areas. Give me about an hour.”

“Can you fix the missing part? Add the love back in?”

“You mean put back the missing person? We’re not called, ‘Photo Shoppe of Magic’ for nothing.”

“Good. Put her back in as if she belongs, almost like nobody ever left.”

“We’re experts in what we call digital re-assembly. The edges will appear seamless. We’ll also correct any differences in color cast or contrast, because when someone cuts out part of an image to fit inside a locket, years later, the two parts won’t look the same. The locket is exposed to more light, and the original rarely sees light. When you compare them years later, you’ll always see a difference.”

“I always have seen a difference.”

“The final image will look like she’s been in it all along.”

“Actually, I do my best work alone.”

“There’s a nice café around the corner.”

“Thanks. I’ll stop in when we’re done here. What’s that thing do?”

“Not exactly. I need to scan photos into the computer so I can start working on them. There’s chair near the exit if you’d prefer to relax while you wait.”

“That’s okay. I’m relaxed. Do you think they’ll take over some day?”

“But where’s the missing part, the part you want merged with the original?”

“In the bottom corner, it even says, ‘Presto!'”

“I must have misinterpreted it as the truth. My mistake.”

“People do that sometimes.”

“It is. I’m afraid I can’t do much with the part that’s been cut out, but we can still restore what’s left.”

“I don’t need restored what’s left. It’s already left. Maybe I came in here with false expectations, and I think I’m leaving with less than I came in with. This place is like a bad marriage.”

“The missing person. Is she your wife?”

“Was my wife, is their mother.”

“Until it gets tired of holding broken pieces, then it lets go. Why did you cut her out? Divorce?”

“She cut herself out. I’m here to get things put back.”

“Photography lets us do that.”

“So, like an idiot, I took the box up to her. Even brought her a glass of wine to enjoy while she soaked.”

“No, no touching when she’s in the bath. That’s her time. I walked in and she was as beautiful as ever, candlelight dancing, suds on her glistening body, all relaxed and smiling. ‘Here,’ I said, ‘and ‘here’.”

“Not a word. She pulled out this photo and held it next to the candle light. I asked if she could see the past better if I turned on the light, and she looked at me as if I’d brought up roadkill. She just drank with one hand and held up photos with the other.”

Sometimes it’s bad. So I left. Went back downstairs. I think I heard her singing.”

“What was she singing?”

“Some love song. They all sound the same. I fell asleep in the chair watching an old John Wayne western.”

“I think Dean Martin was in it.”

“Yes. So, I fell asleep on John and Dean, and woke up in the middle of the night to an infomercial about an amazing kitchen gadget.”

“We had pretty much everything they sold. Just not on those new colors. Anyway, I think she was already gone by the infomercial.”

“What makes you think so?”

“The room smelled fresh. So you can fix it?”

“Here’s what I’ve done so far. Just some quick fixes to give you an idea. See the damage on the left, where some of the photo was ripped away? Here’s the before:” 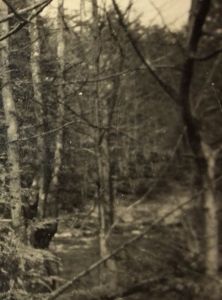 “Thanks. What about the missing part?”

“Probably still inside her locket.”

“She kept it when she left.”

“Isn’t it weird that she would cut herself out and take only her own image, and not her kids?”

“You had to know her. I guess neither of us did. When I went upstairs while the infomercial was on, I saw that she had removed herself from every family photo. And what’s worse, she left the candle burning. I could have died.”

“She took herself with her.”

“Not without the missing part. I can’t just make her up.”

“Then can you put this girl in the blank space?”

“The girl who checks on me.”

“Observant. Cut him out.”

“You want me to put the face of the newly married girl who checks on you, in place of your wife, in your old family photo?”

“Yes. Even a fake magician can do that much, right?”

“But this one’s in color. The original is black and white, and the background and pose and print and the size and surface texture, everything’s different.”

“Sir, it won’t look natural. I can resize her to fit, but I can’t change the pose, or the fact that this is her wedding photo, and the groom is in the image. Her husband.”

“He’s a jerk. Tell you what, don’t cut him out completely. Leave part of him in, just enough so he can see what’s going on. Don’t resize her. She’s the perfect size. Just plug her in the hole. She’s the same age now as my wife was in the original photo. But leave the pearl necklace. I got that for her as a wedding gift. Don’t blend her in. Leave the sharp edges. She’s the kind of girl who should always stand out from the background.”

“It will look good to me. I’m an old man. I’m faded black and white. She gives me color. It splashes it all over the house every time she comes over. Stop trying to fix things. Just do what I’m paying you to do. Replace what’s missing. That’s all I ask.” 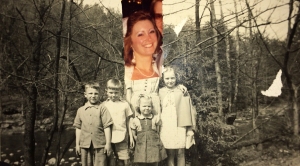 “My day’s getting better and better. How hard is it to print two enlargements, one for me and one for her?”

“Done. You can pick them up at the end of the counter.”

They don’t call us Photo Shoppe of Magic for nothing.”

1 thought on “The Photo Shoppe of Magic”