Something a little different for today … and a revisit of a topic discussed a few years ago, but now with a different application.

The more I create, the more I wonder why I’m driven make things. It’s because… I can’t remember. It’s not that I can’t remember the reason, I do it because my memory can’t be trusted. Since I can’t trust it, I rely on intentional manipulation.

Memory is defined as a three-phase process:

Encoding. The receiving, processing and consolidating of received data.

Storage. The creating of a so-called permanent record of the encoded data, and

My problem is mostly with the third phase. I observe as a profession, so I’m pretty sure that the encoding part is functioning as designed. I think I’m OK; therefore, I am.

If my life is a collection of sensory experiences encoded and stored, all I need to is access data and hit playback. That’s all. It’s that clinical and scientific-sounding, right? But where does the emotional element come into play?

What about emotion or creativity? Do these intangible things go with memory as it is stored with the data of an event? Sometimes we recall the same memory, but feel different emotions. How does that work? Suddenly, the above definition of memory seems incomplete, or a gross over-simplification.

Let’s revisit one of my favorite quotes and apply it to the study of memory. It’s the first sentence from Lovecraft’s classic story, The Call of Cthulhu:

“The most merciful thing in the world, I think, is the inability of the human mind to correlate all its contents.”

That quote could have been included in the 20-pound text book I used when I was an adjunct college instructor teaching Engineering Physics III. The first 80% of the book explained how the universe worked. The next 19% said, all of that stuff we just covered is sort of how things work, but not really.

The last 1% was a confessional that we know almost nothing about everything. Let the records show that most of the stuff out there is not only not understood, but it’s unknown to such a degree that professionals refer to it as dark matter and dark energy.

Dark as in, a shrug of the shoulders. Dark as in, where’s the dang light switch in this place? Just between us, I’d say that’s true for most of the stuff in here as well (pointing to my heart).

A popular quantum physics theory is that our universe, everything seen and unseen, everything that ever was, is, or will be, may be controlled and made to function by Messenger Particles.

They are something we cannot measure, but it is capable of crossing the universe very very very fast, as in infinitely faster than the speed of light. The Messenger Particle’s sole purpose is to assign to everything an identity, instantly, at the point of formation.

They are responsible for telling elemental components that make up a single atom of oxygen that, when you encounter two hydrogen atoms, the three of them will become something different, called water. The oxygen atom will know a hydrogen atom when it sees one, because of the Messenger Particle.

Does the Messenger Particle carry information for components that support memory too, or does it only apply for the tangible things? Surely, emotion, passion and creativity aren’t left to be without purpose.

I apologize. I got a little off-topic. I started out talking about memory, then forgot. This is an image of mine from a toy camera with a plastic lens about fifteen years ago. It accurately represents the sunrise I experienced on that morning. 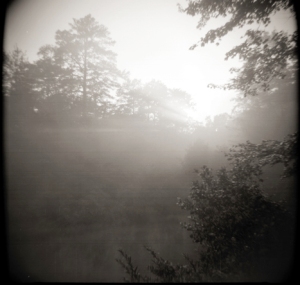 Of course, it’s not a realistic depiction of that sunrise, but it’s exactly as I remember it. It’s an intentionally manufactured memory recall.

Dad may have been the photographer for the next image. I found it in one of his old wallets. He carried the print around for probably forty years. 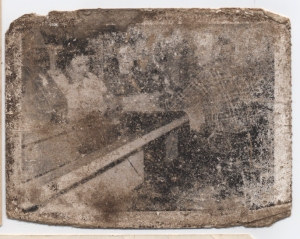 The three faces in the image are my mom in the upper middle, her mom on the left of the image, and her dad on the right.

It’s a great example of what I hate about memory, and why it is so fascinating. Dad kept this image close because of what it accurately represented. Over time, the photo has come to represent something else just as accurate. If he wishes to see them clearer, so do I. All three of the subjects in the image are dead now.

The problem is, the more time that passes, the more my memory of their faces resembles those in the photograph, as it looks now. I can still recall their voices, sometimes to the point of looking around after hearing my name, but I have trouble seeing them as I’d like to remember. This is unintentional memory recall.

Or is it intentional, just not my intentions? Am I losing my memory, or are Messenger Particles assigning non-values to my brain cells, because this is how the universe works?

Are they protecting me from the pain of loss gradually, by removing detail? In some ways, Messenger Particles are responsible for my drive to make art about subjects like loss of memory and the power of photography.

Maybe we know the Messenger Particle by another name: The Muse Particle.