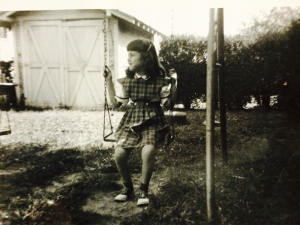 Alison sat on the swing set, not swinging but wanting to…

I walked across the yard to the girl in the non-swinging swing. I stood behind her and pushed.

“You were in the middle of telling me about your whereabouts before you were whereabout here.” I pushed.

“I don’t have much time left, higher,” Alison said. “Will you loan me some of yours?”

“Thank you. Now I’ve got time for you to ask if I am hungry, not so high.”

“Are you hungry,” I asked and pushed not so hard.

I had no response, so I pushed.

“I think you talk funny,” I finally said.

“I think you talk hilariously,” she said.

I pushed Alison higher and not so higher for what seemed like much of my time and most of hers. Now and then, on back-swings, I caught the scent of Alison’s hair. It smelled of lavender and shampoo that she said was called soap.

“Do you have kids,” Alison asked.

“Sort of and not really. They are gone and never showed up.”

“Not exactly. The kids were never born; therefore, they appear just enough to never fully disappear.” I let her coast.

“Alison, where are your parents?”

“I always wonder,” she said. “I wonder if they wonder. I like to think they do.”

“I’m hungrier now than I was when I was hungry,” Alison said. She was wise to change the subject from disappearing parents and kids to eating.

“I’ll go inside to make lunch,” I said, and stopped pushing.

“A broken lawn mower and a new shovel.”

“It’s not safe to play in the shed.” I pushed hard but not as hard as I could.

Alison disappeared in mid-arc. The swing left my hands with her in it, but it came back empty, and hit me on the shins.

“Hang around then disappear.”

“Which part, the appearing or the disappearing?”

“Precisely,” Alison said. Push me again. No don’t. I forgot, I’m no longer swinging in a swing. I’m treeing from a tree.”

“I’m hungrier now than I was when I was just hungry,”she said. “That can only mean one thing! Soon I’ll be hungriest!” She let go of the limb.

“I’ll make us lunch. Would you prefer grilled cheese or vegetable soup and crackers, or maybe a piece of fish?”

“Promise me you won’t play in the middle of the road while I’m inside.”

“I promise,” she said, “to avoid the middle of the road until you return.” Alison giggled like a truly happy child.

“Alison, not everything is funny. Promise you won’t go anywhere or do anything dangerous while I’m away.”

“I promise, but know that nothing is as dangerous as going nowhere and doing nothing.”

I watched the strange little girl through open kitchen windows. She vanished and re-appeared randomly between the yards, front, side, back and then back again.