When I started MappingTheEdge.com, I promised myself three things:

I. The blog would be updated on a consistent basis,

II. The blog would be a forum for addressing only those subjects related to the creative process, and

III. The blog would never be used as a platform to rant.

As often as I break the first one, I might as well break the other two in a single post today. I’m furious. Here’s my problem: Why do dress shirts come packaged as they do!??!?!!

If you don’t know, when I’m not wearing my Mapping The Edge black tights and red cape with “MTE” logo on my chest, I’m dressed as a professional engineer who works in a highly regarded research laboratory.

Yesterday I bought a new shirt and tie. I got home and forgot about it until today, when I wondered what was in the bag on the desk and who had gotten me a gift. I decided to try on the new shirt today, instead of putting it on for the first time Monday morning.

The shirt was wrapped like it was meant to be admired, never opened. Ever. It took both hands to find then open the plastic flap. Then I had to ease the folded shirt out, fraction-of-an-inch by fraction-of-an-inch, Finally, the plastic gave birth to a folded dress shirt… Not that I’ve ever pulled a baby out of a plastic shirt wrapper before, but work with me here. I’m too mad to think straight!

Once I get it out, I proceeded to remove, with by teeth, a total of ten inch-long pins from the shirt. I have no finger nails to speak of, so my extraction technique is to bite down on each tiny silver pinhead and pull my clinched jaws away from the fabric, one pin at a time. Then I walk to the trash can in the other room, lean over and drop them into the trash, one by one.

Well that’s what I did for the first one. After that, I got paranoid that someone would grab the trash bag by the bottom and get stuck, so I fished out the pin and put it in a discarded box. Eight more trips later, the shirt was pin-free.

Stop. Did you do the math? There were ten pins total. I said that I made eight more trips after the first trip. That makes nine. That’s one less than ten. The tenth one was near the top button of the collar, and it had been inserted … from the back!

When I attempted to feel for the tiny silver spherical pinhead with my tongue, this was the result: 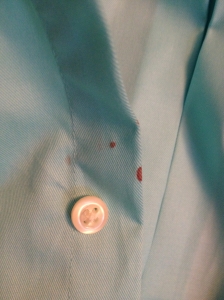 At this point, I wanted to drive back to the department store and return the shirt to their Men’s Biohazard Waste section, find the sales person, and stick out my tongue and ask, “Eh-ooo! Do ooh ting dith woon nee tit tuhs?” Which of course translates to, “Hey you! Do you think this wound needs stitches,” which they would clearly understand, since I’m sure I’m not the only human being who’s ever done that to them, because all dress shirts are packaged this way!

Finally, I removed two sticky strips showing the size and brand that I saw almost by accident through my tears. I’m convinced those sticky strips are strategically placed in areas to maximize the possibility that they go unnoticed by the wearer. Every co-worker will be too entertained by your stupidity to inform you, and every client will be too embarrassed for you to mention it. Magically, as you take off the shirt at the end of the day, the stickers magically become as obvious as they were invisible before.

So after all of that, was I able to try on the blood-stained shirt? Nooooo. Every dang button (all 13) were attached as if no button holes existed. It is as if the buttons had been equally spaced, then sewn where button holes should be but aren’t. The button thread is then drawn tight by a team of horses.

Then was I able to try on the unbuttoned shirt? Yes. Did I? Out of protest, no. I worked stain remover into the blood stain, then hand-washed the shirt under the shower (don’t ask). The stain is out, but now it’s soaking in the sink, just in case the stain remover bleached out a part of the shirt. I need to make sure the rest of the shirt is equally messed up. This is my patented method, but I give you permission in advance to employ this multi-step technique for any of your mentionables or unmentionables.

So, again I ask why. Why are shirts packaged like this? An internet search told me that shirts are wrapped around cardboard and tissue and folded and pinned to itself to, “keep the shape of the shirt”. I’m not impressed.

Manufacturers, don’t insult our intelligence. We purchase products based on expectations. Over the years, we’ve all developed a keen expectation as to the general shape of a long-sleeved dress shirt without having it folded into a rectangle and pinned to a board in order to keep the shirt shape.

By the way, the color in the image is not representative. The shirt’s official color is, “Bermuda”. Apparently, the whole series of islands is this color. Now that is an area that clothing manufacturers should invest in.

Skip the expense of gazillions of inch-long silver pins, cardboard, plastic strips and tisue, and make fabrics that change colors based on mood or need or other items of clothing in immediate proximity of each other. Make things automatically look great together. Do that and shoppers will hand you their wallets and purses. Take what you want.

Do that, or purchase biohazard gear for all sales people and provide basic medical training, because so help me as I type this line, I will buy shirts and remove every pin with my teeth with my eyes closed. I promise you next time I will return an arm-full of items with my tongue stuck out, and I will scream to the top of my lungs,

You can quote me on that!