Exoskeletons of the 17-year cicada litter the campground like candy wrappers after a child’s Halloween party.

We’re experiencing Brood II here in the northeastern United States. Brood II last appeared at this time in 1996. They will crawl out of the ground again in 2030. This 2013 visitation will last a few more weeks, then it’s over. The survivors will return to the earth, just as mysteriously as they emerged.

Like a mid-May cicada struggling to free itself from its exoskeleton, we live life above ground here at the campground. Our daily life is exposed. Sometimes it’s not pretty. There are few secrets from fellow campers. Maybe that’s why so many long-term campers crave privacy.

In case you’re not familiar with RV life, all connections and hoses are above ground, whether it’s internet via cable …

… power via a 30-amp connector, or water supply via the equivalent of an antibacterial garden hose…

… and finally (perhaps most importantly), your, um human waste products via an external expandable hose. (OK, to be more precise, the latter is internally produced within the body’s digestive system, then transferred via human exit port (supplied at birth) into a storage tank below the camper floor. But I digress.)

In our case, believing that an exposed above-ground expandable poop tube was not conspicuous enough, we opted for a blindingly bright red version. 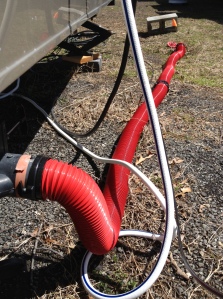 We wanted a color that clearly said, “Stay away! It’s a poop tube!” Instead, ours says, “Hey everybody! Come closer and see our retina-searing poop tube!”

No kidding, if you stare at the red poop tube for at least 30 seconds, then look away, you will see an after image, identical in geometric shape but opposite in color. Thankfully, our brain is smart enough to protect our vision by presenting a “negative” version of the image.

Actually, it’s not fair to call it a poop tube. Technically, it is the primary drainage for two separate tanks, the grey water tank (kitchen and bathroom sink water) and black water tank (pee and poop tank).

There’s even a science to the sequencing of draining the grey and black tanks to minimize blockages and odors, which takes us back to the original intent of the bright red color. Stay away! It’s a poop tube!

Since we’re camping for over a month, the health inspector mandated that we install permanent PVC plumbing for our RV. No kidding. Where could I possibly find spare parts at the campground? Above ground, of course! 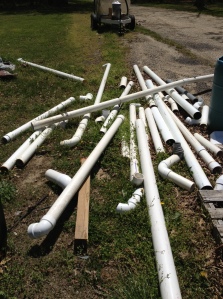 OK, point made. You’re living above ground. So what?

I spent a recent afternoon literally crawling around the campground on my hands and knees with my smart phone camera, documenting the arrival (and in some cases, premature departure) of the cicadas with my smart phone. No not a single raised eyebrow. I’ve been accepted!

I crawled along asphalt that wasn’t here during Brood II’s last visit. Some of the insects emerged to examine their exoskeletons, seemingly amazed that the old shells once fit …

Other cicadas never looked back. As soon as their new bodies firmed up and wings fully extended, they were airborne … 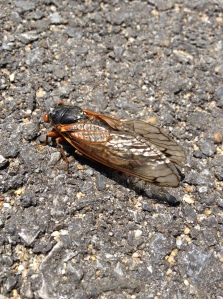 A few, after waiting for that perfect weather day, extracted themselves from exoskeletons only to be instantly quashed by a passing 7-ton RV…

Why? Why struggle to grow and emerge, just to die as soon as your new life starts? Brood II, after not seeing the light of day for 17 years, emerged at the perfect weather day, only to lose a few of the brood to obliteration the very instant they experienced freedom! Why?

Because that’s not the point. The point is that you shed your exoskeleton. Emerge. Your life is in vain only if you remain stagnant. Do so, and you die in your exoskeleton, unemerged. That’s infinitely worse than experiencing death immediately afterwards. Some things are worth the fight, even if it means immediate death on the battleground.

The “me” now is not the same “me” that existed prior to art school. The engineer and artist are permanently integrated into a new third person. Crap! I should have called this post, “In the third person”!

My old clothes don’t fit anymore. There isn’t enough duct tape to keep me in the exoskeleton, even with the threat of a passing RV. As the great philosophers in modern rock music have written and sung:

“Shed my skin… are you ready for me?” (Alter Bridge)

“Inside of me is a man that I knew, who could rattle these chains, who can shake these cages. Inside of you is a dream that I see. And the echoes of voices are calling, inside of me, inside of me.” (Kansas)

“Living life above ground, better than life on YouTube, if you think your tank is full, pull the handle on the red poop tube, red poop tube” (Todd Vinson)

2 thoughts on “What I learned from an exoskeleton”