Maybe you’ve noticed that I haven’t posted new work in a while. I’ve been wrestling with a few art projects lately – not for technique-related reasons, but because of pressure to make art in a way that will be more acceptable to others – not more commercial, more acceptable.

I don’t know where the pressure comes from, but I wish it would go away. Recently, I’ve tried to get my head in a better place by walking. Last week, with ear buds inserted, I selected shuffle and left the house.

Ever hear a particular song exactly when you needed to? A line from the very first song “shuffle” played was Stand Up, by the Steve Morse Band. The song is one of their extremely rare non-instrumentals, and the line is:

The song took me back to my younger days…

Once upon a time, waaaay back in the summer of 1980, I was in my favorite record store (a record… it’s like a big shiny black CD with grooves in both sides and a little hole in the center…). I noticed this album cover in the bin marked “Other”. I didn’t know the band at the time, but who wouldn’t want this cover! Of course I bought it! 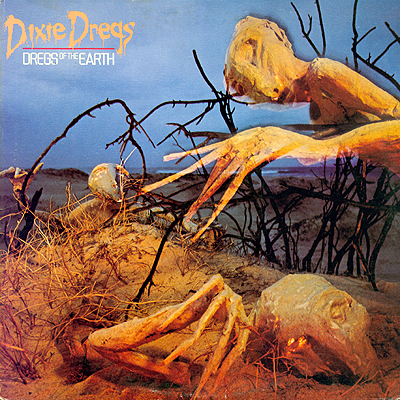 The music was not what I expected. It was better. The recording is a blend of rock, bluegrass, country, jazz, rock/jazz fusion and classical. Oh! And it has a little funk thrown in. The store manager was correct. There was no genre for this group. It was the other!

That’s the day I became a fan of Steve Morse, founding member of the Dixie Dregs, a collection of virtuoso musicians formed during their days at the University of Miami music school. Even as a student, the pressure was there to be someone he wasn’t. According to Steve’s website, a college professor kept asking Steve why he couldn’t sound like other guitarists. Probably because he was too busy being himself.

Over the years, the group’s labels applied pressure to produce more commercially attractive albums, even suggesting becoming a different kind of band, and bringing in song writers to help with hit writing. Morse was not against selling albums, but changes requiring him to be someone else as an artist was out of the question. Steve said, “I just decided that I would rather cut people’s yards or drive a bulldozer,” which he did for a while. But just a while.

Over the past three or four decades, Morse’s guitar clinics have caused college professors to ask students why they can’t sound more like him. The Steve Morse signature model guitar is one of the best-selling instruments in the Ernie Ball production line. He isn’t exactly a household name, but he’s the inspiration of many who are and who want to be.

I’ve seen Steve Morse play in a small club setting. During a break in a Dixie Dregs show, I walked up to the small stage where he was busily adjusting his equipment in preparation for the next set. I listened to a local musician ask Steve some questions. Steve stopped adjusting his equipment and gave the man his dedicated attention for the entire conversation. The guy apologized for taking him away from his equipment, but Steve smiled and said he was glad to help out a fellow musician.

I asked Morse about a Dixie Dregs recording the group had made as a college class project back in the mid 1970s. Steve grinned and said the CDs were for sale in the back, but if I wouldn’t mind hanging out for a few minutes after the show, he and the band would be glad to autograph the CD. He then joked about the signatures possibly lowering the worth of the CD.

I once read that Steve said every time he has a meal, he’s grateful. He said he has food on the table because some fan bought a ticket or CD. In his website bio, Steve says: “As a writer, I am a novice, but I feel my goal will have been achieved if a positive thought is illuminated when you read what I’ve got to say. In the long run, I believe that a musician’s quality is equal only to his quality as a person.”

That walk helped put things back into perspective. They may always try to make me feel the pressure of being someone I’m not. But they can keep trying, whoever they are. My job isn’t to stop them, it’s to stop listening.

2 thoughts on “The Pressure of Being Someone You’re Not”