The following are facts from a real event. The facts are from articles published at RrareHistoricalPhotos.com and Codex 99.

We know that Evelyn Francis McHale was 23 when she was killed on May 1, 1947 around 10:40 am. She died upon impact with the roof of a Cadillac limousine parked along 34th Street in New York City.

We know that Patrolman Morrissey was directing traffic at the intersection of 34th Street and Fifth Avenue that morning, a pale scarf floated down into his peripheral vision, just above the busy street.

We know that Evelyn jumped from the 86th floor observatory of the Empire State Building, 1,050 feet above New York City.

And we know that Robert C. Wiles, a photography student, was across the street that morning. He heard what sounded like an explosion, and he ran over to see what had happened.

Evelyn had been dead for less than four minutes when Wiles made this image with the camera he always carried around his neck.

We know that earlier that morning, Evelyn had returned to New York City after a visit to Easton, Pennsylvania to visit her fiancé, Barry Rhodes, on his birthday. Barry kissed her goodbye. At 7 am she boarded the train back to New York City.

Upon her arrival at Penn Station, Evelyn went to the Governor Clinton Hotel, where she wrote this suicide note (included are the lines she wrote then drew a line through):

“I don’t want anyone in or out of my family to see any part of me. Could you destroy my body by cremation? I beg of you and my family – don’t have any service for me or remembrance for me. (The following three sentences were crossed out: My fiancé asked me to marry him in June. I don’t think I would make a good wife for anybody. He is much better off without me.) Tell my father, I have too many of my mother’s tendencies.”

We know that Patrolman John Morrissey was directing traffic at the intersection of 34th street and Fifth Avenue the morning of May 1, 1947, when he noticed a pale scarf floating into view a few stories above the base of the Empire State Building.

We know that Detective Frank Murray found her coat neatly placed on the edge of the  observation deck on the Empire State Building’s 86th floor. Next to it was a small make-up kit containing family photographs. Next to that was a pocketbook with the note.

And we know that, after being identified by her sister, Evelyn’s remains were cremated. As she wished, no memorial service was held, and there is no gravesite.

What we don’t know but wish we did.

We don’t know why Evelyn decided to end her life.

We don’t know what happened on the train ride back to the city.

What did Evelyn mean by having her mother’s tendencies? Did she mean a tendency toward depression? Did she mean that she felt suffocated by close relationships? Would she, over time, leave Barry just as Helen, her mom, had left her family for reasons only Helen knew?

We don’t know how Evelyn fell over one thousand feet, suffered an impact so violent, that her body shattered glass, literally crushed the limousine’s metal roof and rigid metal door frame, and still looked so beautiful?

This has been called the most beautiful suicide. Evelyn’s dress, the casually crossed ankles, one gloved hand holding pearls, the other above her head, almost as if she’s napping on the train ride, dreaming about a lover’s goodbye kiss.

What we know but wish we didn’t.

As if her suicide could be reduced to a physics problem, I calculated Evelyn’s terminal velocity to be between 120 and 122 miles per hour. That’s about 176-179 feet per second. In other words, Evelyn’s speed at impact was equal to falling 18 stories within one second.

Physics is unforgiving. As elegant as Evelyn appears in the colorized version of the photograph, reports say that her body fell apart when she was moved.

My dad has similar stories from his experience in the US Army’s 82nd Airborne Division. Once, a fellow jumper’s primary and back-up parachutes failed to open. Dad didn’t describe what he saw. He simply asked if I had ever tried to pick up jelly.

We know that the Robert C. Wiles photograph of Evelyn was, “Picture of the Week,” in Life Magazine’s, May, 12 1947 issue. Wiles, a student photographer at the time he photographed the results of Evelyn’s suicide, never published another photograph. 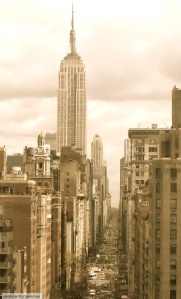 In spite of enclosing observation decks with high fences after Evelyn McHales’s suicide, there have been thirty suicide attempts from the Empire State Building to date.

Amazingly, some have failed. A few have landed on decks below the upper ledge and lived, or were blown by the wind into a window on the floor below.

Evelyn was the sixth person ever to clear all of the building’s setbacks, the much larger portions of the tower’s lower structure.

For the next day or two, I’ll try to convince Evelyn change her history. Her elegance in death is haunting. I’d like her to have a life as beautiful as her suicide.

I think I’ll start by having Thanksgiving dinner with her family tomorrow.